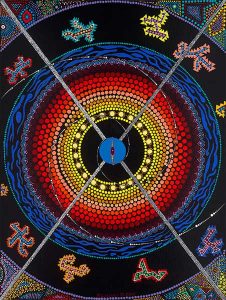 As I read the news reports filled with rage, terror and grief, of corruption and violence, I am tempted to fall into a kind of hopelessness. When I see how many people are hurt, crying out in pain, who are invalidated, mocked and attacked for asking for a right to be heard, a right to thrive, I want to despair.

I witness our institutions in a state of collapse, how the way our economic system is at war with our own constitution, how cruelty, torture, war, and the crushing of dreams has become accepted and synonymous with leadership and American exceptionalism.

It is easy to want to give up.

Looking how rigged the election process truly is, how our major candidates lust for the Ring of Power, I want to recoil in disgust and shame. I’d prefer to go numb, zone out, give into the impulse that says there is nothing I can do that will make a difference.

During those times my little self looks for someone to pin the blame on, some evil force out there. But soon it finds a closer target, some evidence that maybe it’s me, that I’ve failed, turned the wrong corner, been lazy or irresponsible, that I’ve offended God.

Truthfully, I want to cry with pent up feelings and frustration. But really, maybe we are all enduring a hell of a lot of grief, terror and rage right now. It’s pretty intense to just remain present on earth right now during such an enormous transition and retelling of the Great Story.

Many of us have endured a lot of loss and while some parts of life get better, other parts seem to get worse. Bottom line; things aren’t going to be the same. I’m not so innocent now and I suspect most of us aren’t. Loss of innocence does have its cost and I often find I find I must consciously breathe, to a count, just to keep the panic at bay.

During these times when it can be hard to sleep, hard to get up, hard to keep going, I journey down to the garden and sing praises to the zucchini, talk lovingly to the tomatoes, and marvel at the beauty of the beans.

In the old model, I thought I was supposed to be a great hero, a brave activist, a back-to-the-land pioneer, an eco building contractor, a brilliant psychotherapist. None of that was the “me” I came to be. Instead, I spent most of my life learning firsthand about the experience and the effects of trauma. I was the subject, the object and the experiment.

This year I turned 70 and faced renewed health challenges. I also found that selling art in the marketplace was more challenging than before. I had to work at telling myself that everything that has showed up at the doorstep, even Donald Trump and Hillary Clinton, has helped me to evolve and grow.

Sometimes I’ve been so frustrated that I have wanted to smash my art, like Moses smashing the 10 commandments. I get scared and insecure because things don’t always happen the way I want them to. All my old conditioning and imprinting surfaces with those little nasty voices that basically tell me to quit being an artist and get a real job.

Fortunately, talking to myself like a prison guard doesn’t work anymore. Sometimes I have to go out into the mountains, set up a chair by the creek and yell and scream at God for being such an asshole, for being so intractable, so far away, and so difficult to please. I hate it that I don’t get rewarded for trying to “do good.” I hate feeling like God is against me because I can’t get what I think I need. So I have to sort of vomit up all this stuff and vibrate it away from me with sound or breath or visualization.

In the end, isn’t this confrontation with the God I image still me? Isn’t the consciousness that is screaming the same one that is being screamed at? Almost always, I wind up having to release old judgments and repressed feelings that well up like geyser. How often is it me I’m disappointed in, projecting and blaming God instead? How many times do I find myself still carrying the old ancestral load of shame and guilt?

Nowadays it’s a chore just to show up. But I keep telling myself that if I can keep going, even if it’s a crawl, I can stay awake with respect. To me right now, that is everything.

Although sometimes I am flooded by waves of feeling alone, that I’m no longer on God’s radar, still, there is that love in me that is with me always. Like a mandala, it is the center point from which I can re-flower myself.

I write this because I am conscious of the fact that whatever I deny, whatever I reject in my consciousness, comes back to me in a form of a fate I cannot control. This seems to me to be a spiritual law of creation, no less potent than the law of gravity.

I have this odd feeling that whatever rage, terror, grief and shame I suppress will find its way into the empowerment of demagogues and false prophets who are only too willing to project it out on designated enemies in the form of violence and revenge. That’s the power of the Shadow, the power of projection.  Deep down I am convinced it’s not global warming that is the real problem, it’s loving ourselves, which would take care of just about everything.

So while I have no global answers, no heroic stances, and no wondrously insightful solutions to our problems, I do have a response to myself. Go plant a tree, help a friend dry apples, lend a drill, share my true feelings. Dispel the darkness by lighting my own light. Hold myself with love and tenderness. Reach out when possible.

I can’t put the bankers in jail or fix the rigged voting system. I can’t stop fascism in America. But I can write this post, get out in the garden, make a rock mandala, take a walk, display my greeting cards at the local art store, and forgive myself for judging myself for not having enough, doing enough and being enough.

I can also thank the divine intelligence for gifting me with consciousness and this earth, for loving me, caring for me, and helping me through every step of the way.

And maybe for today, that will be enough.

The Importance of Visionary Experience