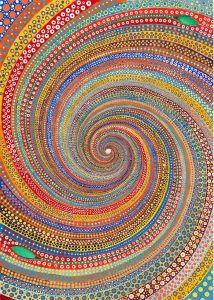 Throughout the history of mankind, shamans, mystics, artists & visionaries have recorded spontaneous encounters with the divine or the demonic. They have spoken of visions, visitations by gods, angels, supernatural beings,journeys to heavens and underworlds and ecstatic union with God.

These experiences, luminescent as they are, resulted in the activation of archetypal forces so powerful that they transformed not only the individuals who had them but in some cases the entire cultural paradigm for hundreds or even thousands of years.

Every religion owes its origins to this kind of experience. Many great achievements, both in art and science have had their source in visions, dreams and intuitions. Historically, the renewal of culture itself is deeply connected to this kind of visionary experience, to the creation of a living myth, a Great Story, that influences and even structures whole cultures.

Our own 400-year old paradigm of western-based science has largely discredited such experiences as infantile regression or  superstition at best, and psychosis and pathology at worst. The voice of the mystic, the visionary and the God-inspired has been silenced from our awareness, in favor of a rigidly rational view of reality that is exclusively physical, material and validated solely through objective measurement, dissection and the five senses.

The power of this world-view, this paradigm, has had a massive influence on every aspect of our society. So successful has this world-view been that we scarcely notice the assumptions upon which it rests. We take it as fact that logic and reason are superior to emotion and intuition, that man is separate from nature, that the parts explain the whole, that subjective knowing is invalid, and that consciousness is a result of the brain’s chemistry.

Science assumes life to be an accident: the product of random mutations of chemical and atomic bonds.  Evidence that suggests that consciousness may be beyond the brain is categorically rejected.

Paradoxically, a large majority of us profess faith in a supreme deity. Yet despite our stated reverence of such visionaries as Christ, Buddha, Mohammed and saints who have insisted that a direct experience of a transcendent or immanent reality is our birthright, it is much more likely that the visions these people experienced would today by rejected or pathologized by both the spiritual movements they founded and our mental health institutions.

It has been said that where there is no vision the people perish. Our culture appears in a state of crisis, of rapid and acute change. The Judeo-Christian image of god that has structured Western civilization for 2000 years is dying. The old moral consensus is gone, the old vision no longer guides us, the old answers don’t work. Evidence of being favored and blessed by God has been reduced to the  quantity of wealth and political power we enjoy. Our supreme science remains impotent to validate the core of our inner experience, a soul it denies is real.  This loss of vision leads to demoralization, breakdown, fanaticism, psychosomatic distress, addiction and collective crisis.

Yet, it is precisely in these times, where new conditions necessitate a radical re-examination of our most basic values and outlook, that these ancient encounters with the divine may rise again in new visionary forms for the purpose of renewing, revitalizing and transforming our culture and our lives. As Joseph Campbell has said, “at the bottom of the abyss comes the voice of salvation. The black moment is the moment when the real message of transformation is going to come.  At the darkest moment comes the light.

It is not improbable then that we may encounter someone engaged in their own visionary, mystical or dark night of the soul experience. If we respond with acceptance and respect,  moving beyond the limitations of our own paradigm, they may reveal to us the radical self-organizing and healing potential that exists within a psyche that has touched the transpersonal. In doing so we gift our own collective with perhaps the very thing it needs at this time, and so we ourselves become an agent of renewal.